Seeing Larry Lucchino, chairman of The Jimmy Fund, at a recent conference on cancer survivorship, reminded me of the time I was a nervous wreck when I was on the radio being interviewed for one of Dana-Farber’s major fundraisers, the WEEI/NESN Jimmy Fund RadioTelethon, held at Boston’s Fenway Park over 36 hours and two Red Sox games.

How could I summarize my experience with leukemia?

Patients, family members, doctors, nurses, athletes, and local celebrities sing the praises of Dana-Farber. I don’t remember who called me up to ask me to do it, but of course I said yes. I don’t remember why I was so nervous. My sons, who are Boston sports fans and avid WEEI listeners, assured me the interviewers would put me at ease.

Still, with my story going back to 2003, including two relapses and four stem cell transplants, I wondered how I could summarize it. I had stage fright. Even though there would be no stage – just a radio studio in Fenway Park – it would be broadcast live, so, sort of like a stage.

Overdoing it with exercise

Some three years earlier, when I woke up from a coma, one of the nurses said it was a miracle. My appearance on the telethon was miraculous in another way, because shortly before it, I had messed up my face by falling on it… twice.

I was just getting into the groove of running around a local lake when I tripped on a root, earning a concussion and multiple bruises. A couple of weeks later, I fell off my bike got a double bruise.

A producer had wanted to take a video beforehand, of me running or holding a tennis racquet, but I said that my face had to heal first. By the time I looked halfway decent, it was too late. I probably should have done it anyway. I could have incorporated it into my story of pushing myself to exercise to the point where I overdid it. I could have quoted my sister saying she would have been angry with me but knew that my determination helped me to survive.

One of my sons and my daughter walked with me into Fenway Park for the interview (pictured standing with me below with Steve Buckley and Mike Mutnansky). The other son couldn’t make it, but he would join us later for the Red Sox game that was included in the deal. 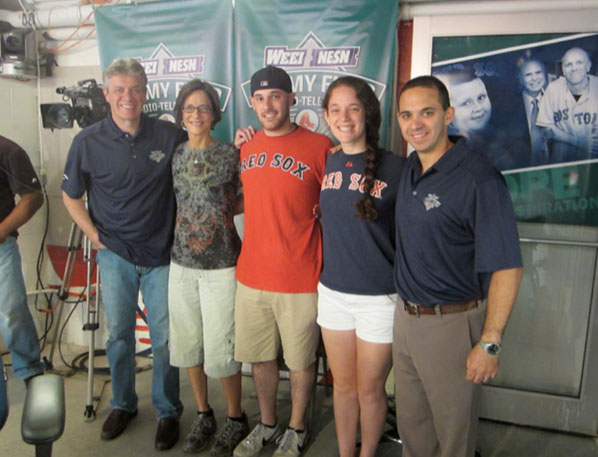 They were right about Mut and Buck putting me at ease.

When one of them asked me to tell my story, I can’t remember how much of it I got into before I asked, “You want the whole thing?” I only had 15 minutes to cover nine years. Everyone laughed. I managed to come up with a summary.

The greatest win is that I was healthy

Like many scary things, the interview had been fine once I got into it. Still, I was relieved when it was over.

The Red Sox were playing the Texas Rangers. My other son joined us on the warm summer night. The four of us smiled for a photo. I was healthy and standing on my own two feet. The Red Sox prevailed, 5-2, but even if they hadn’t won, it would have been a win for the home team anyway.