I had been divorced for many years when I got leukemia in 2003, but I didn’t go into it alone.

My baby sister, Diane, stepped up, becoming my primary caregiver, never making me feel bad about how hard it must have been for her, emotionally and logistically.

She had a husband, a high school age son, and a full-time job as a consultant to non profits.

She managed to be cheerful (yet not overbearingly so), reassuring, and intuitively keyed to my needs.

Taking care of me, my mother, and everything else

It was lucky that she and her husband, David, live close to the Dana-Farber Cancer Institute, where I was treated. It is 90 miles from my home, and during periods of hospitalization my mother went up from New York and stayed there so she could visit me every day. She also had to take care of our mother, who was still mourning the loss of our father just a year earlier and had health problems of her own. 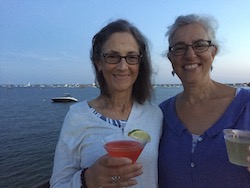 Ronni and her sister, Diane.

When I went there a few days before my induction chemotherapy, she greeted me at the door with a little blue notebook. She thought it would come in handy for writing down appointment reminders, phone numbers, and other things to remember. Because everything had happened quickly, I was probably in shock. It was good to have someone who thought of details like that.

It was her idea to shop for comfortable Gap clothes that I could wear instead of dehumanizing hospital gowns. It was her idea to go to a bookstore and partake in other sorts of retail therapy. We got posters for decorating the walls of the hospital room where I would stay for more than a week.

My three children and my sister underwent testing to see if they were a possible match for a bone marrow donation. None of them was, but my sister was a platelet match. At the time, this didn’t seem as big a deal as it was until years later, after I had relapsed twice and had received so many platelet transfusions that my system wouldn’t respond to those from the general pool. In order not to fall victim to severe bleeding, I needed those that were HLA-matched, and Diane’s fit the bill.1

To donate, she needed to lie on a bed in an infusion room for about four hours. She did this some 20 times, going about every other week.

In between everything else, she kept my friends and family up to date with group emails.

Finding ways to have a little fun

Nothing about it was funny, but we had a little fun.

When all my hair was gone, we planned an outing across the hospital to the wig-fitting lady. I declined to get into the wheelchair that a nurse brought. My mother’s hip was hurting, and we thought she might want a ride. But she didn’t. So we piled our purses into the wheelchair and pushed it along, laughing at the spectacle.

There wasn’t much to laugh about five years later when I had relapsed twice. We had to deal with things as mundane as being placed in a hospital room with no windows – Diane helped engineer the move to another room – and as critical as me going into a coma and nearly dying after my fourth bone marrow transplant.

I was so swollen (from kidney failure) that I could barely move. Diane cut my toenails and filed my fingernails. She paid my bills. She held the phone up to my ear. She brought me a care package of the skin care products that she knew I liked.

When I was discharged after three-and-a-half months, I was too weak to go home. I spent a lot of time on Diane and David’s couch. They got a chair for their shower. It was all I could do to get into the bathtub. She washed me like I was a baby.

She gave me more than platelets. She gave me the comfort of knowing that I was taken care of. Now instead of trudging along hospital corridors, we enjoy long walks on the beach. When I get down, she reminds me of all that I have survived. I don't know how I could have done it without her.

Mixed Feelings About a Transplant Anniversary

It Is Me or My CML Diagnosis?

5 comments
This article represents the opinions, thoughts, and experiences of the author; none of this content has been paid for by any advertiser. The Blood-Cancer.com team does not recommend or endorse any products or treatments discussed herein. Learn more about how we maintain editorial integrity here.