Chimeric antigen receptor (CAR) T-cell therapy is one of the latest treatment advances for some forms of blood cancer, including certain types of acute lymphocytic leukemia (ALL), large-B-cell lymphoma, multiple myeloma, and mantle cell lymphoma.1,2 Additionally, research is underway to study the use of CAR T-cell therapy in people with other blood cancers.3

T-cells are a type of white blood cell. Acting as a key component of the immune system, T-cells fight infections and cancer cells in the body. However, cancer cells can continue to change and may stop or slow the normal T-cell response.4

In CAR T-cell therapy, the patient's own T-cells are removed from the blood, and using an inactive virus, the T-cells are modified to produce a specific receptor on the surface of their cells, called a chimeric antigen receptor (CAR). This receptor recognizes and attaches to a specific protein found on the blood cancer's cells. The modified T-cells are then replicated in the laboratory to create hundreds of millions of copies. The engineered T-cells are then infused into the patient, where they find and kill the cancer cells in the body.4

Creating the modified T-cells may take several weeks. Before receiving the CAR T-cell therapy, patients may receive chemotherapy to reduce the number of cancer cells circulating in the body. The infusion of the CAR T-cell therapy generally takes less than an hour. Patients may be advised to stay close to the hospital where they received treatment for at least four weeks in case of serious side effects.5 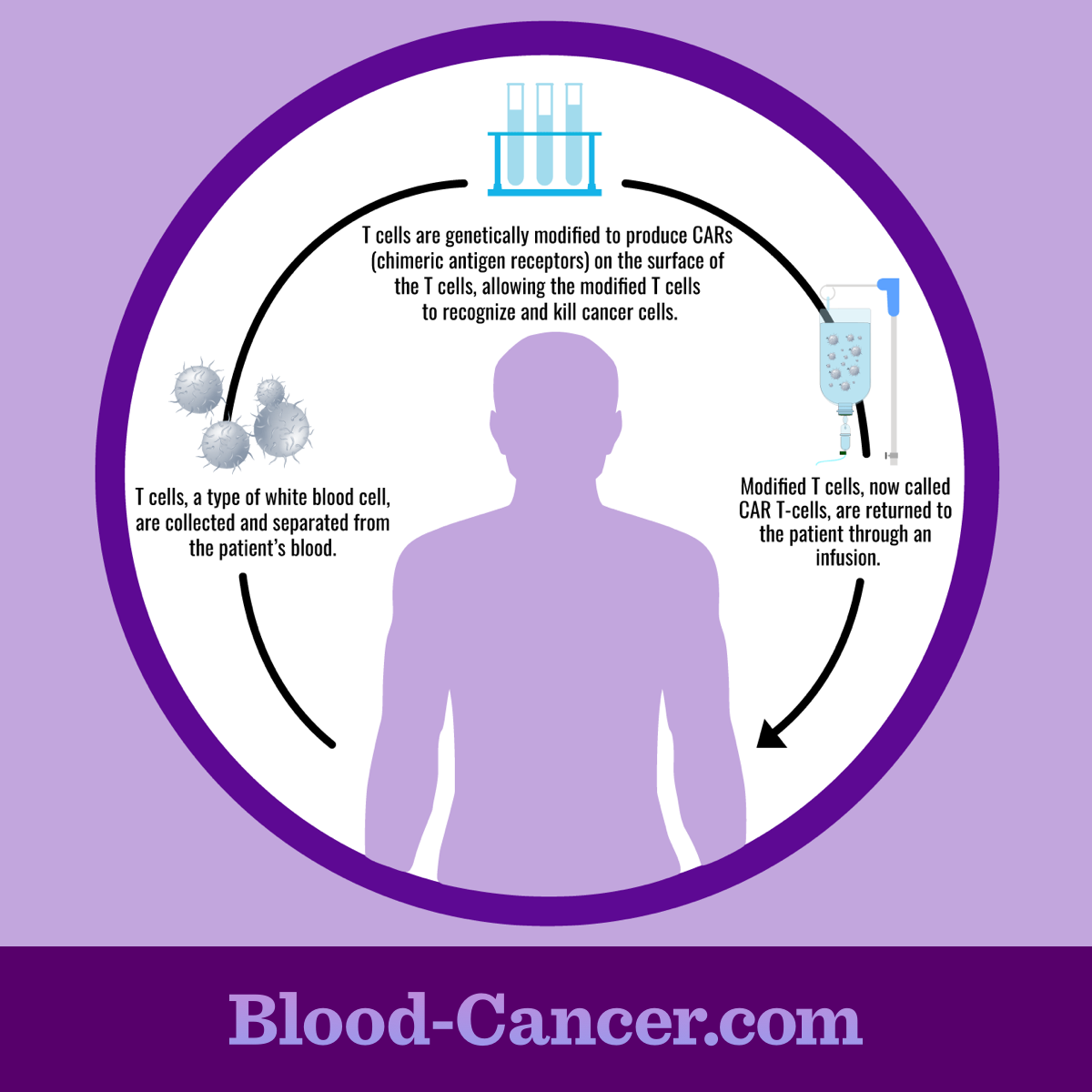 Tisagenlecleucel is approved for the treatment of acute lymphocytic leukemia (ALL) in certain patients up to 25 years of age whose cancer is in second or more relapse (the cancer went into remission but came back two or more times) or refractory (the cancer never went into remission despite treatment). Tisagenlecleucel may also be used to treat adults with certain types of relapsed or refractory large B-cell lymphoma following at least two forms of systemic treatment. The patient's own T-cells are modified to attack cells with CD19 receptor present - CD19 is a protein found on the surface of certain cancer cells. In clinical trials, 83% of patients who received tisagenlecleucel experienced a remission of their ALL.1,5,6,9

Axicabtagene ciloleucel is approved for the treatment of adults with certain types of relapsed or refractory large B-cell lymphoma following at least two forms of systemic treatment, such as chemotherapy or stem cell transplant. The patient's own T-cells are modified to attack cells with CD19 receptor present. In a clinical trial, approximately half of the patients who received axicabtagene ciloleucel had a complete response - their cancer was undetectable - and nearly 30% of patients had a partial response. For those who had a complete response, the effects seem to be lasting with most patients continuing to show no signs of their cancer for at least 6 months after treatment. For those who experienced a partial response, many saw the benefits of the treatment decrease after 6 months.2,10,11

Axicabtagene ciloleucel is also approved for the treatment of adults with relapsed or refractory follicular lymphoma (FL) after 2 or more lines of systemic therapy. Axicabtagene ciloleucel was approved for FL based on the results of the Zuma-5 study. It is an ongoing, single-arm (everyone takes the study drug), open-label, multicenter study. 91% of people with relapsed or refractory FL responded to a single Yescarta infusion and at 18 months, about 74% were still in remission.12

Brexucabtagene autoleucel may be used to treat adult patients with certain forms of mantle cell lymphoma where other treatments have not worked (refractory) or are no longer working (relapsed). In a clinical trial, the objective response rate, or percent of people whose cancer shrunk or disappeared, was around 80 percent. More than 50 percent of people achieved complete remission.6

Lisocabtagene maraleucel is approved for people who have relapsed or refractory diffuse large B-cell lymphoma (DLBCL), the most common type of non-Hodgkin lymphoma in adults. Breyanzi’s approval was based off a clinical trial of about 250 adults with DLBCL. Researchers found that after their Breyanzi treatment, a little more than half of the people in the trial had complete remission.7

CAR T-cell therapy can cause serious side effects, and some of these side effects can be life-threatening. The infusion of the modified T-cells may lead to a serious inflammatory side effect called cytokine release syndrome (CRS). If CRS is not quickly treated, it can cause death. The symptoms of CRS include fever, chills, difficulty breathing, dizziness or lightheadedness, nausea, vomiting, diarrhea, a fast or irregular heartbeat, and severe fatigue or weakness. Patients who experience any of these symptoms should immediately seek medical care.1,8,10

Another potential serious side effect of CAR T-cell therapy is neurological events, including confusion, swelling of the brain, and seizures. Some of these may be life-threatening.4,8,10

Patients should tell their doctor about all other conditions they may have (such as problems with the heart, lung, kidney, liver, or neurological problems) and all medications (prescription and over-the-counter), herbal supplements, and vitamins they are taking.8,10

Because current CAR T-cell therapies are a personalized therapy, they cannot be mass-produced. Some critics have said the price of therapy is unaffordable. Some small, early trials are testing out an off-the-shelf CAR T-cell therapy which uses T-cells from healthy donors rather than the individual patient.4,14

The potential life-threatening side effects are also a challenge of CAR T-cell therapy. Most side effects can be managed if identified and treated early.4