His name is Vegas, which is appropriate. I gambled on him and lost - if you choose to look at it that way. My heart placed a bet that, after 3 years of living with myeloma, my body wouldn't be able to pay.

He went by Mavis when our paths first crossed. He bounded into my life shortly after I applied to foster one of the many dogs hoping for a second chance at life and love.

It was my heart that signed the foster application. My body, after years of chemo-induced fatigue, should have intervened. But my labradoodle, Ziggy, needed a friend, and I needed a purpose. So I rolled the dice on a skinny, brown pitbull-lab mix from Texas.

My heart adopted him, but my body struggled

I was excited to meet my first foster dog, and I was honored to be possibly the first human who got to love him. They found him as a stray, hungry, and emaciated. Like me, he was fortunate to be alive. His lucky break happened when a rescue organization plucked him out of a high-kill shelter in Texas on the very day he was scheduled to be euthanized.

His body bore the scars of his tough life, but his spirit remained unbroken. Gentle and loving, he trusted Ziggy and me to love him back to health. His excitement for his new chance at life was trumped only by marrow bones, squeaky stuffed toys, and any form of food. Zig and I quickly fell in love with this adorable brown ball of sunshine. Before the first two weeks were up, my heart had signed the adoption papers.

But as he healed and recovered from neuter surgery and life, he only had one speed - and it was not slow. I held my breath as the boys tore through the house and yard. Even walking them together was impossible since both pulled on the leash, and neither could control the impulse to chase squirrels. My oncologist had already suggested I rehome Ziggy and get a smaller dog to avoid injuring my already weakened bones. I couldn’t imagine what he would think of this.

As he gained weight, I began to lose it

By the time Mavis had gained five pounds, I had lost ten. As he felt more secure, I grew more anxious. I didn’t anticipate that I might not be able to handle the physical and emotional demands of two large, active dogs.

Their frequent barking was fraying my nerves (and probably the neighbors' as well). Like many rescues, Mavis had separation anxiety, but I didn’t have the energy or expertise to help him overcome it. He also began to whine and howl during rides in the car, and as much as I tried to convince myself to accept it, I was falling apart.

I had not expected two dogs to be more than double the effort. They were supposed to keep each other entertained and tire each other out, but it wasn’t working out that way. No matter how much they played, they needed more of me than I had to give. As much as I loved Mavis, I began to miss my quiet days with Ziggy, who was older and already knew the routine. My body missed being able to rest and take uninterrupted naps.

I had to make the hardest decision

I was overwhelmed and underweight, exhausted, underslept, and more anxious than I had been in years. I resumed seeing my therapist, hoping this would work if I could just get a handle on my anxiety. My palliative care doctor prescribed several anti-anxiety medications, but they only made things worse.

I was heartbroken. It had been three years since my stem cell transplant. Other blood cancer survivors were back to work, climbing mountains, and even running marathons. Why couldn’t I handle two dogs?

One month after adopting Mavis, I tearfully asked the rescue to place Mavis up for adoption once again. I was beyond devastated, but I knew that if I couldn’t care for myself, I wouldn’t be around to care for anyone else.

Vegas taught me to keep hoping and loving

A young lady spotted Mavis’s soulful eyes in the adoption photo. The next day she came to meet him and drive him to his new forever life, now as Vegas. They live four hours away from Ziggy and me, but I get enough updates and photos to know he has a better life than I ever could have given him. I still miss the dog I fell in love with and such a good friend for Ziggy, but I know he is where he should be. And I am where I need to be for now.

No matter how much it hurts, I didn’t gamble and lose. Vegas taught me that there is always hope for a brighter future, no matter how hard life has been. And no matter who has hurt us, there is always enough love in our hearts to love again. The only way to lose in this life is not to gamble at all.

I still have his brand new crate and dog bed. It may look empty, but in it lies a Vegas-sized bundle of hope that someday I will feel good enough to take the gamble once again. 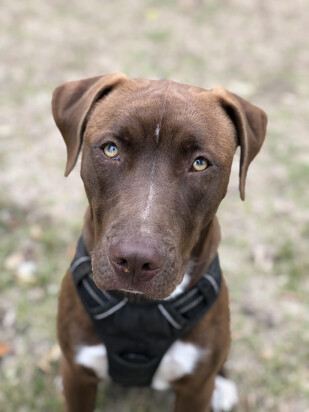 From Finishing a Marathon to Getting Out of Bed, Grinding it Out Comes in Many Forms

14 comments
This article represents the opinions, thoughts, and experiences of the author; none of this content has been paid for by any advertiser. The Blood-Cancer.com team does not recommend or endorse any products or treatments discussed herein. Learn more about how we maintain editorial integrity here.

Do you experience brain fog?