Scanxiety Doesn’t End at No Evidence of Disease 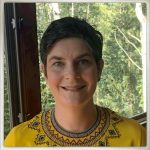 A part of the process of cancer care is the scan. Before my diagnosis with Hodgkin lymphoma, I had heard the terms before but was not aware of the differences between PET and CT scans. Most oncologists use a PET scan to determine the stage or whether a treatment has been successful. My first PET scan was used to assess my staging after I received my diagnosis. I had another PET scan after I finished chemotherapy to determine whether the treatment had worked. My most recent scan was a CT used to be sure there were no new or lingering signs of cancer. Impending scans can create anxiety. One wonders how badly has the cancer spread, did it come back, is there any left, and pray for remission. The words a patient longs to hear, no evidence of disease.

The confusing world of imaging

It can be confusing to understand the difference between a PET (positron emission test) and CT (computed tomography) scan. When I was having my recent CT scan, I wondered about why this was the scan of choice for my follow up. I learned that a PET scan works on a more cellular level. It is capable of detecting early-onset cancer even when it is not detectable by a CT. The PET uses nuclear medicine with radioactive tracers to generate a 3D image. Usually, the two are read side by side to give a comprehensive diagnostic picture. A PET lasts several hours, and a CT lasts only a few minutes but takes place about a half-hour after ingesting the oral contrast.

When comparing my CT scan to my post-treatment PET scan, there was a marked difference in an area of what appeared to be scar tissue on the PET. Now I will return in three months instead of six to be sure whether it is a “radiation change” as suggested by my oncologist or something worse. Because the scan was before my radiation occurred, that may be the reason for the change noted. However, the alternative is that there is cancer growing. My fervent hope is that I am still in remission, and this just a routine scan, yet the anxiety builds as we near such scans.

A person is called a survivor from the moment of a cancer diagnosis. At that moment in time, they become a living person with cancer, a survivor. Survivorship can mean something different when a person has received the coveted clear scan with no evidence of disease. Survivorship after remission feels like a battle won yet the blood tests and scans can feel like a dark cloud looming. There is this constant quiet fear and building anxiety as the next scan approaches.

Focusing on surviving and thriving

I am choosing to focus on not just surviving but thriving. I want to be positive and grateful for my health. Even though I can get distracted by the what-ifs and worries, I will consciously live in this moment. Being informed about what each scan means and understanding what my life will be from this point forward allows me to feel some control in an often uncontrollable world.