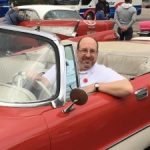 I’m thinking about finally getting rid of my treadmill. I’ve had it for 12 years. I used to use it a lot, but these days, it’s mostly gathering dust.

I know lots of follicular lymphoma patients who say that living with the disease is like running on a treadmill. It’s considered incurable, but can sit still for months or even years. We’re not exactly “sick,” but not exactly “well,” either. Lots of action, but not moving anyplace. Like being on a treadmill.

Treadmills might make great metaphors, but I’m talking about an actual, physical treadmill. I think part of my reluctance to get rid of it is that it’s so tied up with my cancer experience.

(I was going to say “cancer journey,” but it isn’t really a journey if you’re running in place, is it?)

My wife bought the treadmill for me for my 40th birthday. I was a runner back then. She thought it would be safer for me. She worried about my running in the dark, and with the treadmill in the basement, there were no cars to worry about.

But the treadmill sat idle for a while. My birthday is in June, and those cool late spring/early summer mornings were too nice to run inside. A few weeks later, I had a bout of bronchitis that I couldn’t shake. The pollen and car exhaust made it too hard to run outside, so I finally tried the treadmill. It was OK. The motor was loud, and so was the sound of my feet pounding. I missed the peaceful quiet of my early morning runs outside.

Eventually, the bronchitis turned to pneumonia, and my runs turned to walks. All through the fall, I kept getting sick. A CT scan showed a spot on my lung and a swollen lymph node in my chest. Soon, the swollen nodes near my hip bone were worrisome enough that I needed another scan. A few days later, a biopsy. A few days after that, a cancer diagnosis.

I kept running. By now, I was used to the treadmill. I still didn’t like it, and even with earbuds in, I could hear the pounding of my feet and the grinding of the motor. Then my son started to join me in the basement. At 10 years old, he had become an obsessed sports fanatic, and as I ran on the treadmill, he’d watch ESPN SportsCenter, catching up on highlights from the night before, and calling out scores to me, breaking my peace. I liked having him near me, though. I think he felt the same way.

My diagnosis wasn’t easy on him, or on his brother (aged 8) and sister (aged 6).

One night, after I put them to bed, I heard the boys talking, and put my ear to their door.

“How do you know?” his little brother asked.

“He was running on the treadmill this morning.”

The joy of running in place

Another runner once told me that some runners are running toward something, and some are running away from something.

Sometimes, on those morning runs on the treadmill, I was happy to be staying right where I was.

Sometimes a treadmill is a metaphor for the in-between that we live in as cancer patients.

And sometimes, it’s a way to convince ourselves that everything is just fine.

I’ll probably keep it for a little while longer.