This will be my first of several blogs about traveling with immune deficiency and chronic pain. Getting ready for extended travel has had its ups and downs. It runs the gamut from maddening to hilarious. Hopefully, some of what I say helps those considering travel.

I feel I should set the table a little for those that haven’t read much of what I have written.

Before I became a target of multiple myeloma, I was very physically active; running, weightlifting, basketball playing, and being a small business owner. Prior to running my own business, I was employed in international operations and sales for the home furnishings industry; so, traveled all over the world, and mostly loved it.

MM changed all that when it caused 10 of my vertebrae to totally collapse. My physical activity became almost non-existent, and chronic pain, a constant companion. Running and travel became treasured memories.

A lot of MM veterans told me that there would be improvements, where my imagined impossible, might become possible again. I didn’t believe them, knew I’d never be able to travel again, and really didn’t even see myself being able to ride in a car for much more than an hour.

After about 2 years had passed since diagnosis, and although pain, fatigue, and immune deficiency were all still my mates, I’d gained back enough health, where I was able to start actually planning and taking trips. Impossible was at least in my rear view mirror.

I started out with short day trips. Short became medium, and medium became longer. Sleeping away still presented a problem because I couldn’t get in and out of a bed, let alone sleep in one without extreme discomfort. A rented recliner or a trailer to carry my recliner were necessities.

Then one day after a lot of therapy and walking, I was able manage sleeping in a bed again. My trips then became a little farther and longer, with the culmination to this point, being a 40th Wedding Anniversary, fifteen-day, vacation to Denmark, Norway, and Croatia, which we just completed.

Houston, we have a problem

Unfortunately, two of my my longer “training” trips for the Europe trip ended in disaster. I got lung infections and pneumonia on both. I thought I had been careful using masks, washing hands, carrying wipes and gel everywhere, but evidently, I got sloppy a couple of times, and paid the price. It definitely made me rethink 15 days in planes and unknown environments.

One complication we discovered during this period, was that my Revlimid maintenance dose was becoming toxic, bringing my red and white counts down to dangerous levels. My medical team and I decided I should stop my maintenance ahead of the trip, to even have a chance of surviving without getting sick. We made the leap of faith.

Let's do it right and have fun doing it

My wife Sue, bless her heart, was in charge of medical supplies for the trip. She made sure we were stocked up on gel, wipes, Lysol spray, and masks (the plain white kind). I went on line and researched finding the proper masks that had a little flair and bought a couple. One was what I call my heavy metal rock mask, and the other is my very fashionable camouflage mask.

As many of us are aware, wearing our masks in public tends to create reactions; mostly subtle. What I was surprised at, was that in Europe, those reactions became a little less subtle. I’m not sure if that is a continent-wide phenomenon, but it was common in the countries we visited. Of course, we were mostly in tourist areas, so I guess those folks could have been from anywhere.

But, because Sue and I were hell-bent on me getting through the trip without getting sick, we weren’t going to slack up on our mask policy because of reactions.

Instead, I decided to have a little fun with my face masks, where I included my baseball cap and sunglasses to create a combination of “looks”. I wanted to see if the reactions were any different. Believe me, those reactions went all the way from people laughing to people actually stopping dead in their tracks, and jaywalking to the other side of the street, to be as far away from me as possible. A lot depended on if they could see my smiling eyes.

The following are photos of my combinations and a little about the reactions each received. I also had a name for each look.

Number 1: are you contagious? 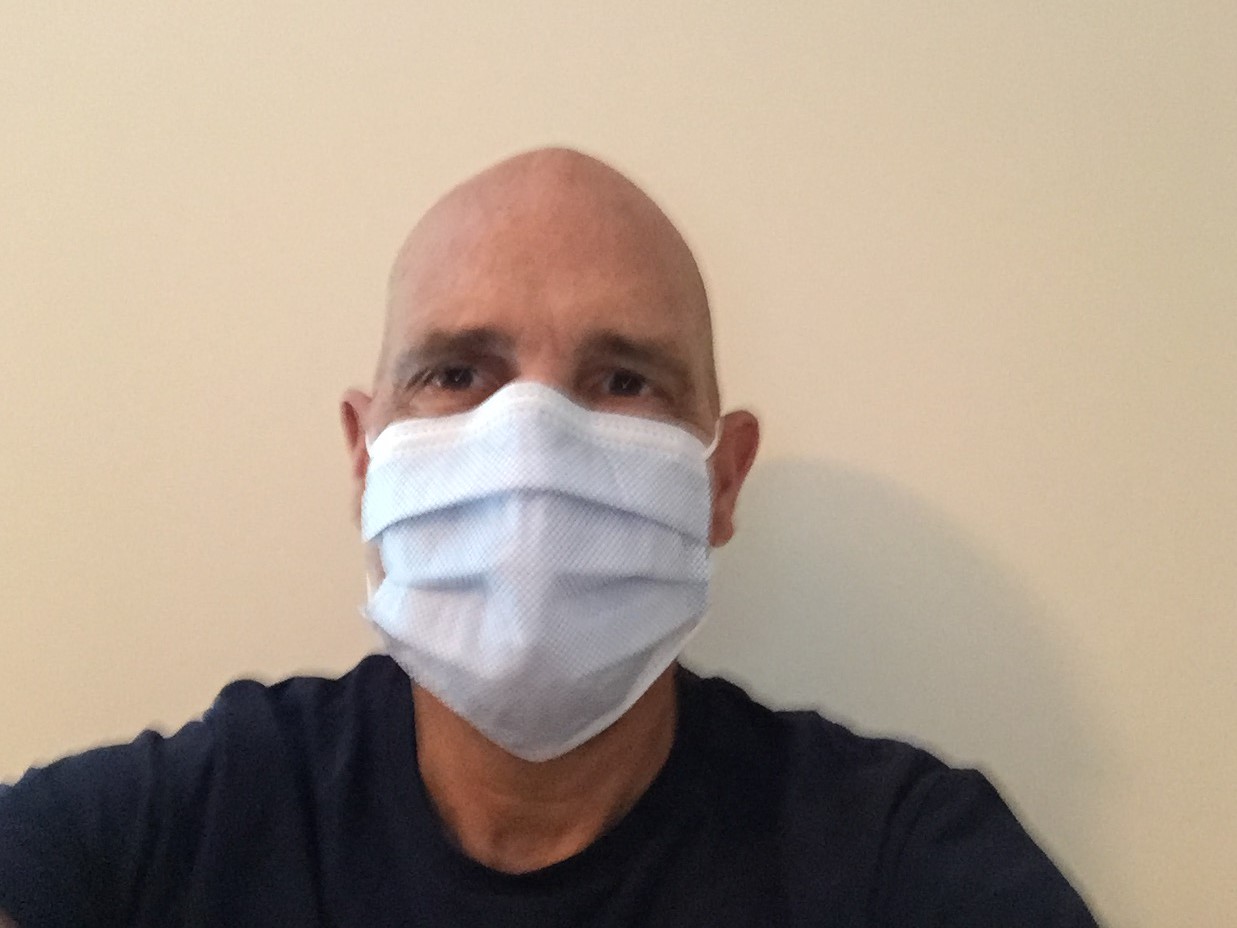 This simple little number is modeled after the masks that made their way into the “sick fashion” mainstream when SARS and Swine Flu became the trendy diseases to stay away from. Everyone wore them in Asia at the time. It became even more common around the world when we immunocompromised folks started spending more time in public places. Of course, many people still don’t understand whether you are protecting them or yourself, so it still tends to be a question raiser; mostly to the five-year olds, whose parents usually tell them, “He probably is sick, and is trying not to get other people sick.” 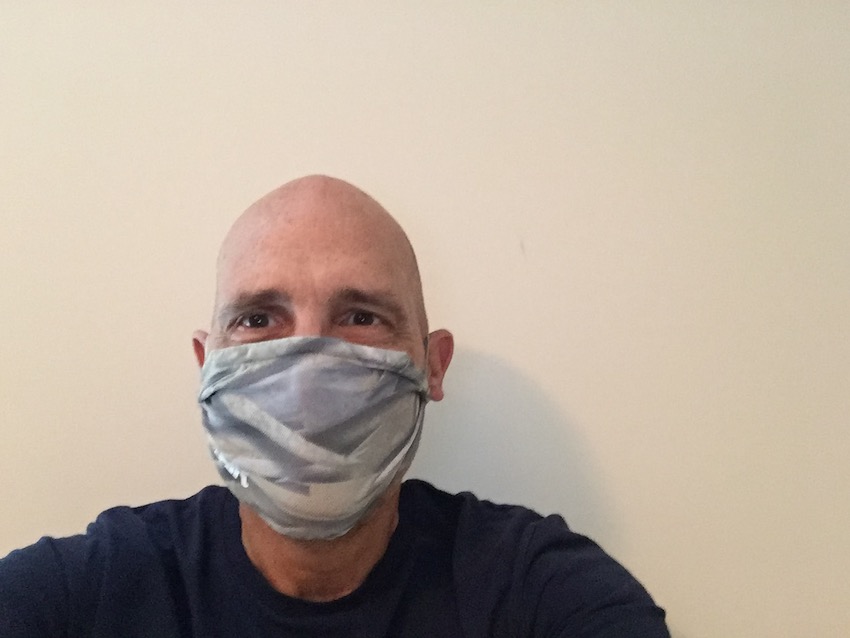 This ensemble is the more fashionable version of its “Are you Contagious” counterpart. There are all sorts of designs available to fit all situations, yet bring a stylish element to your crowded beer tasting, concert, high school play, or basketball game. Responses here are actually a little less of the concerned type. The right design can actually be calming because they look much better than the white quarantine type masks. Some people here in North Carolina just think I’m doing a Cam Newton impression, where I’m just wearing my scarf in the wrong spot. 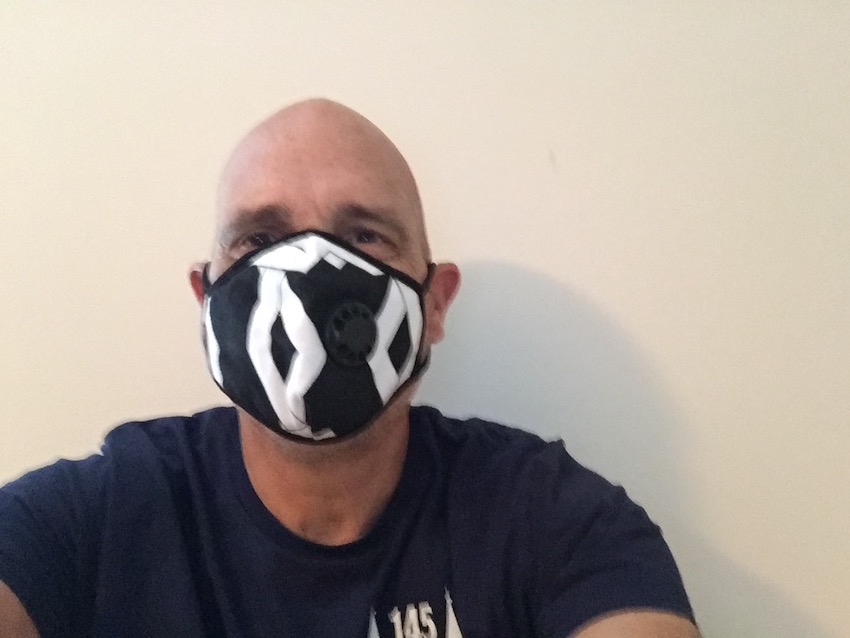 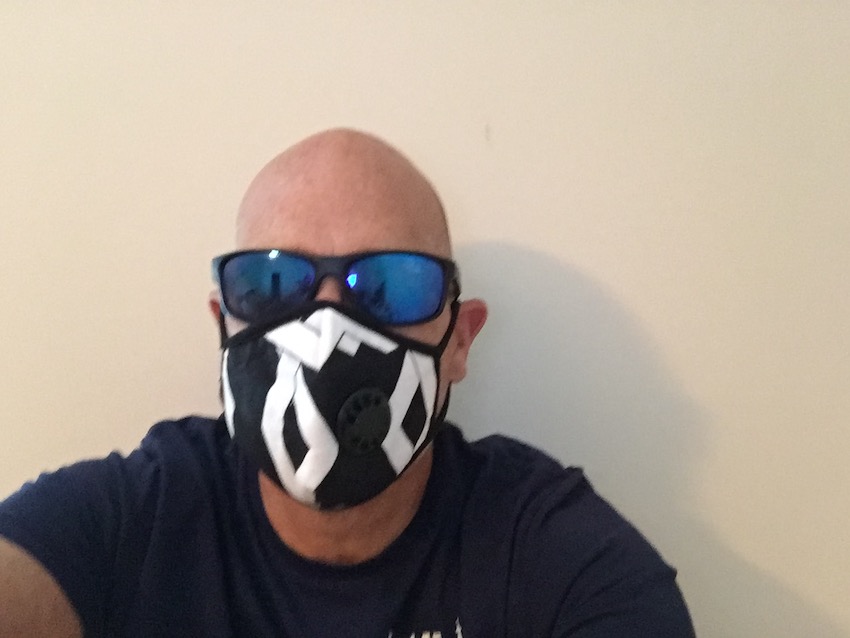 This look goes well if you are dressed in all black and headed to a rock concert or out on your Harley. It went over well when I wore it to go see Metallica. I got a lot of the forefinger/pinkie hand signs signifying “rock and roll” and “cool”. The sunglasses can add a touch of “hip” when worn to an outdoor music festival.

It can also be used in more common situations if you want a little wider swath to walk in when you are on a crowded street or in an airport. Many people in those situations are not worried that you are sick, they’re just worried.... period. It will give you about an extra foot of personal space compared to numbers 1 and 2. 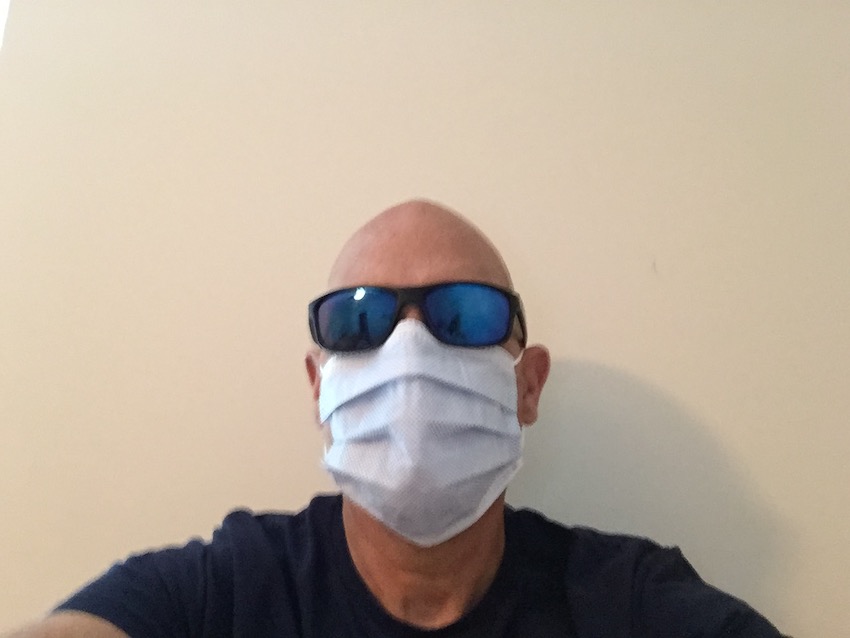 This look gives people the idea that you might be contagious and hungover at the same time, but is usually needed if you are taking public transportation on a sunny day. Some people just can’t quite reconcile why you would wear a medical mask outdoors or sunglasses indoors. It’s your basic “oxymoron” look. It also gets people starting to wonder if you are trying to hide something more than that awful contagious disease you might be carrying around with you. 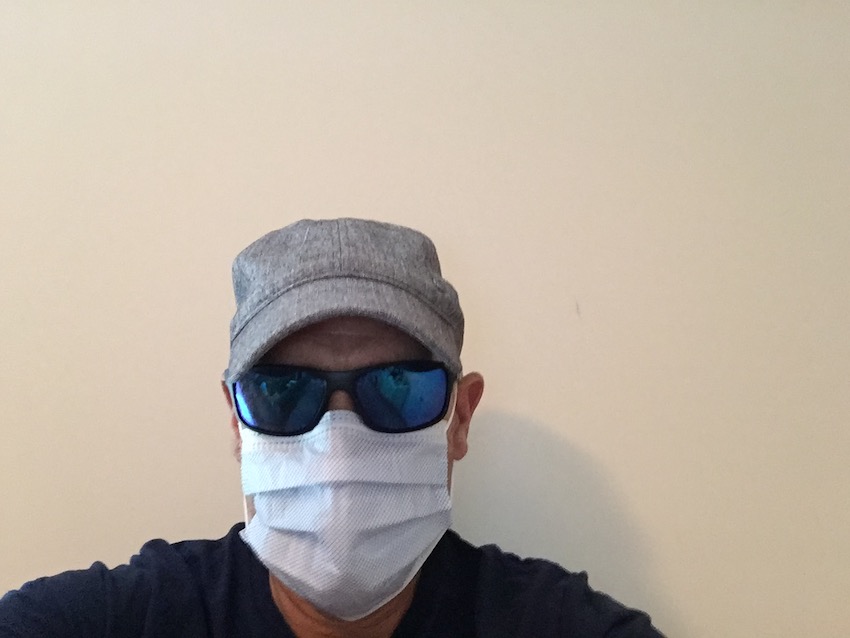 Possibly my favorite look. It works well when you are doing a lot of walking in the sun or the rain, but have to get on and off public transportation. It covers almost all weather conditions, has that hint of cool, and really messes with some people’s minds. I actually had people get up from their seat and move away when I walked into a bus. It’s a great way to make sure you have a seat and no one close enough to cough on you. My wife Sue finally had to tell me to knock it off... and I was having so much fun... 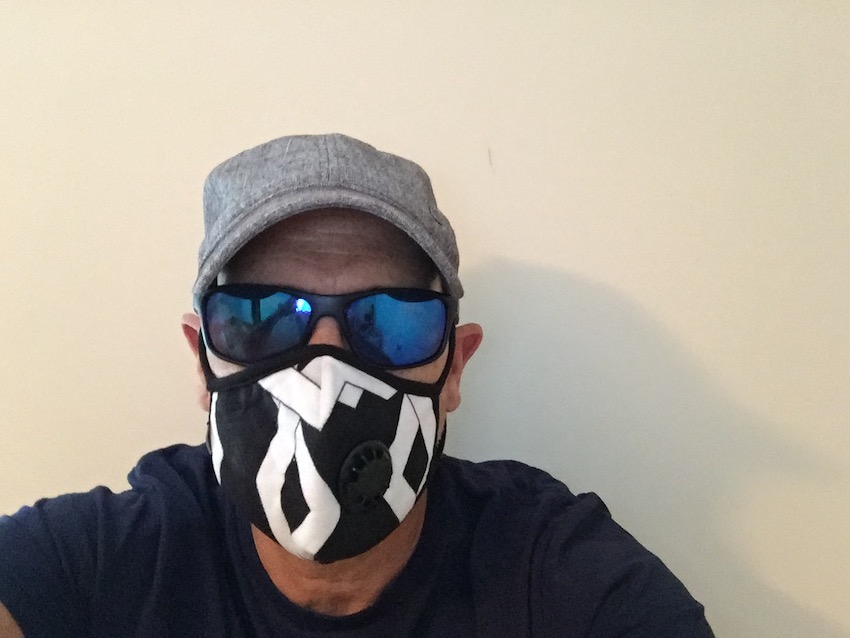 This little number should only be worn in extreme circumstances where you either know you are going to be around sick people and want them to stay away, if you are having a bad day, and just need a laugh, or if you plan on robbing a bank. When our vacation to Europe was ending, I wasn’t sick yet, and I was going to either be in airports or on planes for the next 20 hours. I was actually considering this look. I was going to make sure I created a “immunity bubble” around me.

With the help of Sue’s advice, I came to my senses, realizing it wasn’t such a good idea to rock this look around airports.... especially on 9/11. I think I’ll retire the look unless I decide to go see Megadeath, Hellhammer, or Danzig. As you can imagine, I dropped back to my “Are you Contagious” look for the trip home.

In a way, having a little fun with my “mask-eurades” made traveling with immune deficiencies a little more bearable and fun. Instead of worrying about drawing attention to myself because of the mask, I turned the tables and made sure I drew attention because of the mask. It actually relaxed me. Hopefully, for some of you traveling in the future, this or other type of “relaxer” will help.

Maybe all of us should rock this new look at a conference and have a "Maskeuraid! Instead, I have an idea. I might have a fundraising event to "aid" my cause, where everyone comes in a hand made or purchased, decorated mask. Of course, donated prizes...

The Benefits of Leaving the House

2 comments
This article represents the opinions, thoughts, and experiences of the author; none of this content has been paid for by any advertiser. The Blood-Cancer.com team does not recommend or endorse any products or treatments discussed herein. Learn more about how we maintain editorial integrity here.

How has blood cancer impacted you financially? (select all that apply)