When I wake up in the morning, I get up and lie down on the floor. It’s not because I’m going back to sleep. It’s because I want to lie down next to my chocolate Labrador retriever on her L.L.Bean bed.

I snuggle up next to her and give her a belly rub. She puts her paw over my arm and I stare into her deep brown eyes.

This sounds corny, but it is true. It sounds touchy-feely, but what can I say, it is. Sometimes I sing a silly made-up song, maybe to a Broadway tune or a melody in my head. It could be, “Good morning to you,” or “How are you today?”

But wait, there is more.

We go down to the kitchen, she sits down, and I kneel down and give her “morning huggies.” Then, since she’s a Lab, she wants to eat right away. I have time to make my coffee before we go out.

My house is empty without a dog

After a stem cell transplant, they used to say "no" to pets. I don’t know when they changed that rule, but when I had my first transplant in 2003, my furry golden retriever was on hand to greet me when I came home. Getting back into walking her around the lake near my house was one of my goals. It kept me motivated as I took baby steps to build back my strength.

I can never go very long without a dog. The house is too empty. After Misty died and I recovered from the punch-in-the-gut feeling of losing a dog, I got the chocolate Labrador who owns me now. I wouldn’t say that she lowered my blood pressure at the time. She chewed a hole in the wall and gnawed at the bottom of the dining room chairs. She ate so many leaves off of my favorite plant that I had to give it to a friend to plant sit. 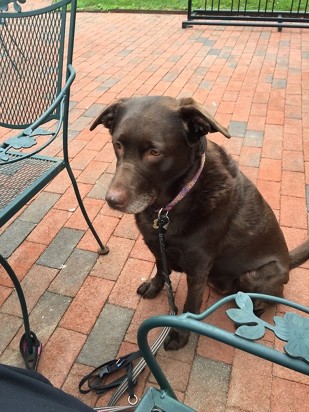 She was just a puppy when I relapsed in 2007. I was afraid that she would unnerve the already frazzled household: my three kids and my former husband, who she stayed with while I was in the hospital. But everyone survived. Even when she was naughty, she probably was a good distraction.

Pets and our well-being

She helps me in ways that science backs up. A while back, I was going through a spate of high blood pressure and I had to take my blood pressure at home. It was high when I took it at my kitchen table. So I sat down next to her on the couch, where she hangs out on a blanket next to one armrest. (We tried unsuccessfully to keep her off the couch but gave up.) I synched my breathing to hers. My blood pressure improved.

According to The Human Animal Bond Research Institute, I am not alone.

"People are happier and healthier in the presence of animals,” according to the website. “Scientifically-documented benefits of the human-animal bond include decreased blood pressure, reduced anxiety, and enhanced feelings of well-being."1

Here are some specifics:

Positive human-animal interaction appears to be related to changes in physiological variables both in humans and animals, particularly dogs. HAI has been shown to influence levels of blood pressure, heart rate, hormones correlated with well-being including cortisol, oxytocin, b-endorphin, prolactin, phenylacetic acid, and dopamine.1

If you want to take a deeper dive into the science, the website has a lot of information. If you have a pet, you probably know all about the benefits without needing scientific proof.

Radio on the Keyboard - Episode 1