The one thing I have learned in recent years is that when you post a picture of your pet on social media, whether it’s doing something silly or just being cute, you’ll get more loves, likes, and comments than anything you could post about yourself.

We all love our pets, and fortunately, they love us back a whole lot more. You experience this love everywhere. Many of my conversations at Connexion 2019, the Health Union conference, continued to prove to me that not only are our relationships with pets valuable but they can become even more so after you have been diagnosed with a life-threatening disease.

Those conversations were always a wonderful give and take of respect, love, and empathy. There was always a special spark when we talked about our kids and grandkids, but bring up pets, and the conversation went to a whole new level.

Dogs are a big part of my life

Personally, I am and always have been a dog lover. There were dogs in my life as a child and early teen years. When I went off to college, got married, and started having a family, pets were part of the scene, but really became family when we got our Golden Retriever Telli, and a few years later got another Golden named Zeno. The bonds between them and our family were as strong as the bonds among our human family.

Over time, both Telli and Zeno passed. Two of the toughest days I think I’ve ever experienced. At the time, my career required a lot of time and travel, so we held off bringing another dog into the family.

As time went on, there was talk of getting another, but we took no action. We decided to enjoy and spoil our grand doggies.

The most devastating news: A multiple myeloma diagnosis

Then I was diagnosed with multiple myeloma and pet magic started to happen.

I have told this story to quite a few people.  Please indulge me one more time if you have heard it.

Part of my “journey” has been the severe toll MM has taken on my back. I had 7 collapsed vertebrae in the first six weeks after diagnosis. It was pure hell. I had 3 back operations while undergoing my MM treatment.  Every time I was forced onto my back on a hard table for a scan, another vertebra collapsed. I wasn’t able to get around without a walker until about sixty days prior to my marrow transplant.

Several weeks prior to my transplant, I started having severe back pain again. I found out another three vertebrae had collapsed. I went to see a spine specialist, who basically told me I’d never run again, pick up more than 20 lbs. again, bend over to tie my shoes again, or walk upright without wearing a heavy thoracic brace.

This was the most devastating news I had received since the day of my diagnosis, maybe in my life. My youngest daughter, Kara was with me and saw my anguish. I wasn’t her strong dad anymore. I needed more help than any of us could have imagined.

Considering a service dog as a cancer patient

The next day, Kara started searching for a facility that trained service dogs and found one near her home. She made a phone call to get costs, finding out the magnitude (choking sound here), especially if you had to buy the dog.

The facility though had taken in a stray about 3 weeks earlier. They named him Finn. He was a street dog that had a chain he had outgrown, tied around his neck. His breed was unknown, but except for the white patch on his chest, you’d think he was the cutest black lab you had ever seen. He was street smart, but that wouldn’t cut it as a service dog.

During the three weeks between Finn being turned in, and my daughter making an inquiry, he had shown some willingness to be trained. They suggested she come in to meet Finn and offered a discount to train him for me, if the family, and I were open to it. Off Kara went with my other daughter Mandy and my wife Sue to check him out. About a week later, on the night prior to my transplant, they brought the idea up of me having a service dog named Finn. I relented (wink, wink) and said I’d like to meet him, which I did several weeks later.

How did you spell that?

Fast forward a few months, Finn had been in training to meet my needs. Mostly as a support animal when I walked, and to pick up and retrieve things from the floor, like shoes, dropped pens or cell phones. We were ready to pick him up and start his transition into our family as a “service animal”, which is an animal specially trained for a job, while only becoming family on special, structured occasions.

The day before we were going to pick him up, our neighbor, Monie, who is a breast cancer survivor, came by to see me. The conversation turned to my service dog. I told her he would be at my home the next day.

Monie then proceeded to ask the standard questions; what breed is he?, was he well trained for my needs?, what was his name? Of course, the answer to the last question was “Finn.”

Monie, beaming with a smile said, ”Oh, what a great idea, you mean F-Y-N-N?” As I went to correct her, she continued, “Yeah, I go to a support group and we use that acronym for Find Your New Normal all the time.” To say the least, I agreed that’s how it was spelled, and Finn became FYNN.

It was meant to happen

Well, Fynn and I have been together for about 18 months now. He has been a Godsend. The little booger has to go on a long walk every day, which has forced me to do the same. I no longer need the back brace, but still occasionally need him for physical support, and definitely to retrieve things from the floor, especially my walking shoes. 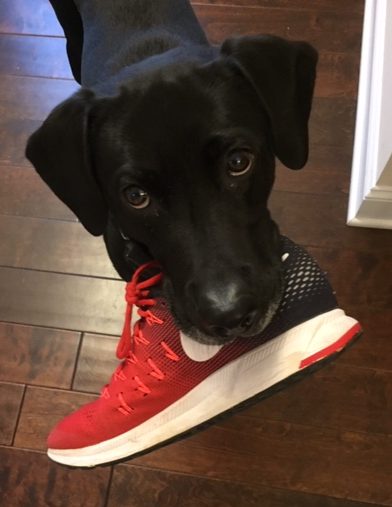 Is he a service animal? Yes, he is, although he’s a little rusty on some things. Could I have found another dog that would have been a better service animal? Also, yes. Fynn is about a 5 out of 10 when it comes to doing what he was trained for.

Did we waste our money? Absolutely NO! Fynn showed up at exactly the right time for me. I think “serendipity” or “fate” is how I’d describe it. It was meant to be. He has become more my friend than service animal. In fact, I probably serve him better than he serves me. I don’t think I would have it any other way.

Well, that’s my pet story. I hope you felt me “beaming” as you read this. I’d love to hear your stories about the influence your pets have had on your journeys and recoveries.