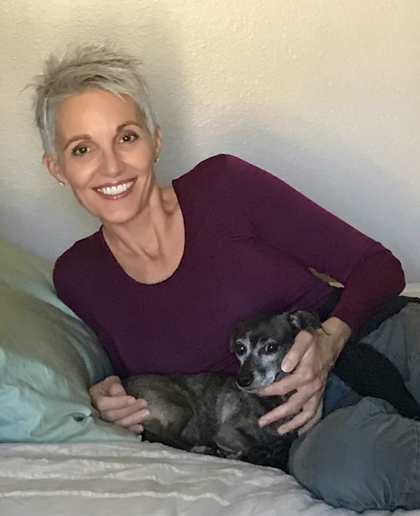 We are extremely saddened to say that on October 23, 2019, Cherie Rineker passed away. Cherie was a valued member of the Blood-Cancer.com and multiple myeloma communities. We are honored that Cherie shared her experiences with our community and beyond. She will be deeply missed.

Cherie Rineker grew up in The Netherlands. Due to her mother’s religion, she was not allowed to see doctors as a child. This caused her to suffer needlessly as a child, but it also made her afraid of doctors and medicine. Knowing that she had to do something for her health, she turned to holistic medicine and studied at Clayton College for Natural health to get her BA in Naturopathic studies. She also studied nutrition, massage therapy, reflexology and colon hydrotherapy at the Cayce Reilly school for Massotherapy in Virginia Beach. In 2011 she worked as the spa supervisor at the Tree of Life in Patagonia Arizona. It was here that she started to see the rigidity in some of the holistic movement. Her attitude changed from “you must follow a strict diet or else”, to “live life in moderation but Love with all your might”. She was known to some of the guests as the “Oprah” of colonics, because she saw the value in helping others by opening up about her own struggles. After leaving the Tree, she went to SWINA a holistic esthetics school in Tempe AZ. It was here that the stubborn back pain she had been dealing with for a long time, and which she contributed to her busy schedule as a therapist, became unbearable. Cherie started to see many specialist, but because of her appearance and age, she was brushed off. It wasn’t until she ended up in the ER on November 3rd 2012 that she was diagnosed with cancer.

Her journey has been a tough one. “It was hard to change my mind from a holistic approach to allopathic medicine, and I was scared to death of chemo because I had always been taught chemo kills.” At 44, with a daughter who had just turned seven, her life, full of physical fitness, triathlons and challenging hikes, became sedentary and wheel chair bound. “It was hard to make it to the kitchen without being totally out of breath”. It took a couple of months before the chemo started to work. Cherie almost threw in the towel in those first months struggling with severe nausea, pain and daily fevers. “One day I was ready to call it quits, but I looked over at my daughter and told myself if I could not fight for me I at least owed it to her, and so I started my fight in earnest.”

Her fight has been far from easy. In less than five years she went through 14 lines of therapy, including two stem cell transplants, numerous radiation treatments and 60 months of non-stop chemotherapy. After the initial shock and depression started to disappear, Cherie decided to make the most of life by becoming an active advocate and blogger. In March of 2012 she did a CAR-T that put her in complete remission for the first time since her diagnosis and she was finally able to be cancer and chemo free. The break lasted for a year and on CAR-T’s one-year anniversary she relapsed once more.

“I feel I have looked death in the eyes for six years now and I have made peace with it. I still want to fight, but more importantly, I want to make the most of my time left on earth, and the best way to do this is by creating as much Love as I can through sharing my story, helping others in their journey and living in the present moment. The only thing we can take with us is Love, and the only thing we can leave behind is Love, at least that is what I believe.”

Cherie is the author of “A Pilgrimage Without End, how cancer healed my Broken Heart”. Part of the proceeds will go to mm research. She can also be seen on Patient Power doing interviews and writing articles and does the same for Myeloma Crowd. She helps myeloma patients by listening to their fears and concerns, and always leaves them with something to feel inspired about. You can follow her on Facebook, Twitter @myelomaauthor, Instagram and www.cherierineker.com.

Click here to read all of Cherie's articles on Blood-Cancer.com.