What is Chronic Myeloid Leukemia (CML)?

CML tends to grow slowly. However, CML can change into a rapidly growing leukemia that can be more difficult to treat.1

A gene is a segment of DNA that is passed from parent to child. Genes are arranged into chromosomes, and each person has 23 pairs of chromosomes.6 Each time any cell divides, it makes a new copy of its DNA. Sometimes errors occur during this division.1

These DNA errors can cause cancer when a cell grows out of control and crowds out healthy cells. Or, a DNA error can cause healthy cells to turn off rather than fight as they should.1

Many people with CML have a genetic abnormality called the Philadelphia chromosome, which occurs between chromosomes 9 and 22. The switching of the pieces of chromosomes 9 and 22 result in the creation of an oncogene called BCR-ABL, which can lead to the development of CML.1,2,5 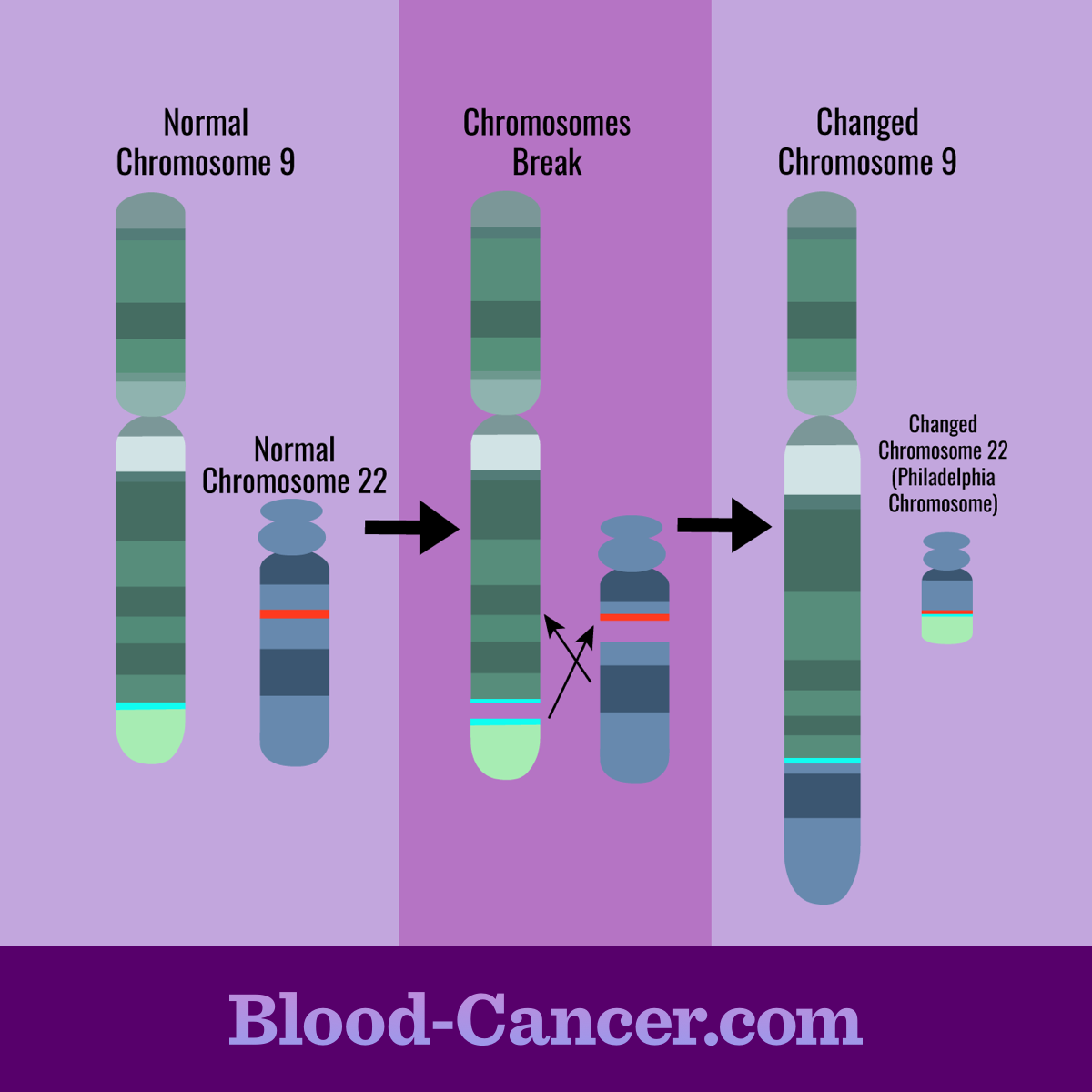 CML mostly occurs in adults and men, with an average age at diagnosis of 65. CML accounts for about 15 percent of all leukemias in adults.1

What factors increase a person’s risk of developing it?

Risk factors are things that can increase the chance someone will develop a disease. Only a few risk factors for CML are known, including:

What are the common symptoms of chronic myeloid leukemia (CML)?

The symptoms of CML may be vague and easy to attribute to another illness. That is why many people are diagnosed when they have a blood test for other reasons. Symptoms tend to come on slowly.

Common symptoms of CML include:

CML can cause other problems as the cancerous cells crowd out healthy blood cells, including:

How is it staged?

CML is grouped into 3 phases:

What is the prognosis?

Over the past few decades, the survival rate for leukemia, including CML, has improved. Based on data from 2009-2015, the National Cancer Institute has determined the 5-year survival rate for CML is 69.2 percent.7

Survival rates are based on earlier outcomes of people who survive a set amount of time after diagnosis. With cancer, experts talk about the “5-year survival rate.” It is important to keep in mind that many people live more than 5 years after diagnosis. Plus, these statistics do not always take into account people treated with newer, more effective drugs.

Recently, highly effective medications have become available to treat CML. Many people with CML who have used these newer drugs have experienced longer survival rates.8,9

Rash Decisions: CML and the Skin I'm In